Sometimes I write about the world outside of pharma. This world has more mud and no need for Zinc approval, but it’s incredibly good fun. If this doesn’t make you want to go orienteering nothing will.

(The following was published in The Northern Scot newspaper and on moravianorienteering.org) 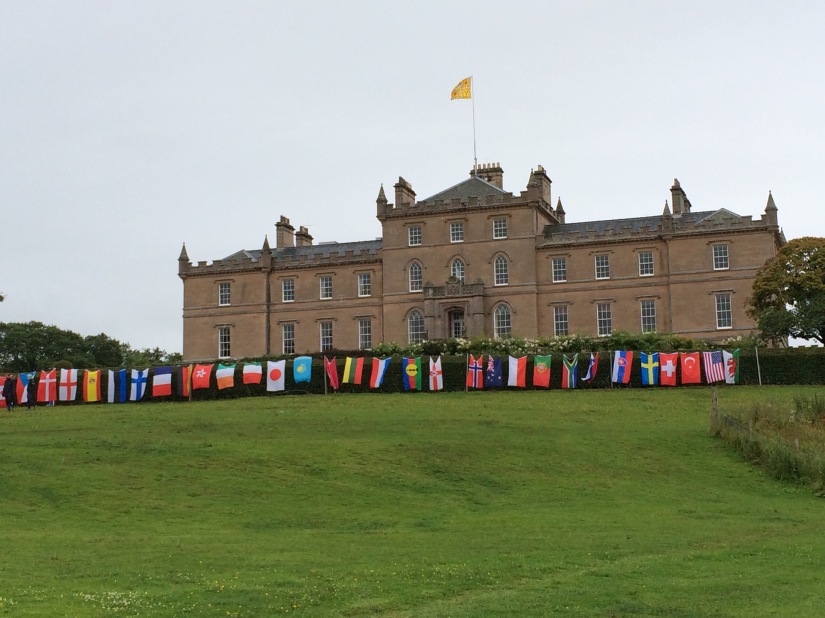 Like festivals? Fond of mud? Handy with a map? Then look no further for your ideal family festival.While many local families have spent the summer looking forward to Belladrum or the Gentlemen of the Road Stopover, some families have been attending an altogether different type of festival here on our doorstep – The Scottish 6 Days Orienteering competition.

Running alongside the World Orienteering Championship, the Scottish 6 Days Orienteering competition is an opportunity to experience world-class orienteering within a festival atmosphere. Designed to appeal to all ages and ability, there’s something for everyone. Age classes range from under 10 to over 80 and above and the midges and mud are included as standard, as with any respectable Scottish festival.

As a novice orienteerer, I approached Day 1 of the festival held at Achagour with trepidation and a severe lack of map reading experience. But what really struck me as soon as we arrived was the wonderful international family atmosphere. From our own Moravian club alone we had an abundance of families in attendance, running alongside juniors, seniors, novices and everything in between from Italy, Sweden, Hong Kong, Czech Republic, Switzerland, Spain, Lithuania and more. The sight of hundreds of colourful tents and flags from all over the world, here in our little corner of Scotland, was electrifying.

The navigational courses we ran started through thick vegetation before heading across the marshes. Some runners may have encountered a ditch that could be crossed via two specially constructed bouncy walkways, but thankfully my route bypassed that. Instead, my mud splattered legs and trainers full of boggy water were led over fields to Achagour Fisheries and into a confusing and disorientating forest plantation before hitting a field archery range, and then finally ending up back at the wonderful festival atmosphere. Some people pay hundreds of pounds to be physically challenged by mud, bog, fences, fallen trees, ditches and other various obstacles. At the Scottish 6 Days, these challenges come as standard for a fraction of the price!

Day 2 was held up beyond Inverness at Strathfarrar. The sun shone, the international crowd mingled and the competition remained fiercely friendly. Best known to Munro baggers as a quiet and secretive glen, Glen Strathfarrar is usually under strict access control with only 25 vehicles allowed into the area on any one day. But over 5000 international orienteerers left at the end of the day happy and content with a good day’s running done.

Day 3 and we’re really into the swing of this festival. The World Orienteering Championship, running alongside the 6 Days, might be getting all the media coverage, but it’s my fellow Scottish 6 Day competitors that are helping to swell the ranks of spectators cheering on those elite map-wielding athletes. The atmosphere at Darnaway on Day 3 was thrilling. Watching the men and women’s Middle Distance Final on the big screen while simultaneously cheering on the competitors as they crossed the finish line in front of us was priceless. Fuelled by venison burgers, Aberdeenshire cheese and meilie pudding oatcakes (thanks to Event Scotland and the Year of Food and Drink), we sampled the off road delights of Mountain Bike Orienteering before soaking up the atmosphere at Darnaway. Where else can you sweep through fields of golden oats and barley to gardens of a stately home teeming with people who just love running through forests with a map? You could almost taste the sense of adventure in the air.

Day 4 and we’re back to Darnaway. The mud and midges might be less prominent (shh, don’t tempt fate) but the family festival atmosphere continues. Moravian are one of the clubs responsible for organising Day 4 and as usual, the hard working Liz Barr, Jane Halliday and Donald Grassie produced a phenomenal day with the assistance of many other Moravian members. One of our members, Derek McNeil, spent the day celebrating his 73rd birthday by running in the M70L class (for runners aged 70 and over) – Happy birthday Derek! My little family team ended up spending most of the day on the String Course – a mini orienteering course that allows even the youngest of budding orienteers to have a go. As the name suggests, the map has you following a piece of string around different controls and is loved by all children, even the ones that were zooming past me on the ‘grown up’ courses.

My weary children are now tucked up in bed, having spent the last 4 days giddy on fresh air. They’ve explored new forests, made countless new friends of many different nationalities and run through fields of oats and barley. Each day has been bursting at the seams with adventure. And we’re doing it all again tomorrow.

If you’d like to come along on a family-friendly adventure with us, our next event is at Sanquhar woods on 22nd August (see moravianorienteering.org for more details). Everyone is welcome.

With 12 years experience of healthcare copywriting, I set up Highland Tonic to enable me to work remotely from Scotland while still doing the job I love. When I'm not nurturing words, you'll find me baking up a storm of lemon drizzle cakes, hunting for a Gruffalo in evergreen forests or hanging out on social media. View all posts by Suzanne Lynch-McKay (Highland Tonic)

What are your thoughts on this? Cancel reply

This site uses Akismet to reduce spam. Learn how your comment data is processed.

In 140 characters or less

This website is hosted by Wordpress.com and uses cookies help me to understand who visits my site and the content they read, simply to help me improve the site for you, my readers. If you would prefer not to receive cookies from this site, please see www.allaboutcookies.org for information on how to set your browser not to receive cookies and delete existing cookies. The privacy policy for Wordpress.com can be found at http://automattic.com/privacy/